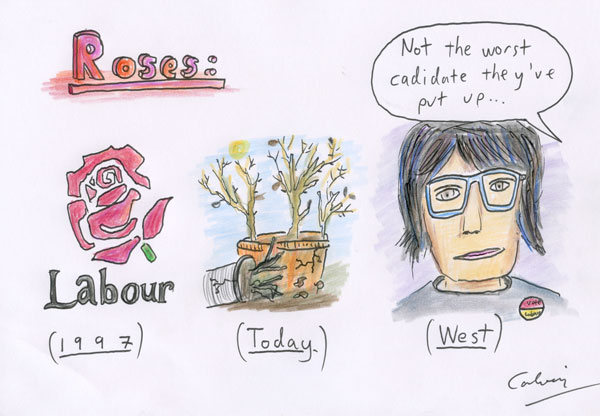 There were a series of elections this week including Scotland (which we’ll get to in a minute) but also local elections in England with Labour losing more seats than Bill Gates will when he and Melinda divvy up the furniture. A wave of condolences of course poured in from their political allies such as the IRA, Hezbolla, Iran and the Muslim Council of Great Britain. Apparently it turns out that voters don’t want to vote for people whose agenda offers very little other than trying to claim MPs expenses, ban the teaching of history in schools, and maybe push for a referendum on rejoining the EU. The end result of course is that even Hartlepool didn’t care to vote Labour, and instead turned bluer than a late night George Carlin routine, or that time that Shaun Ryder went on TFI Friday. That last reference is a very 1990s one but then it has been over 15 years since Labour won an election, that was the year after Arsenal last won the Premiere League, maybe it’s something about wearing red. Peter Mandleson made reference to the party malaise being down to the two Cs of Covid and Corbyn, although most voters looked at the likes of Keir Starmer and saw a third C. The embodiment of a niche lifestyle obsessed with maintaining a rigid class system where the rich people live in London and discuss legislation not in Westminster but in the letters page of the Guardian. And a 2nd, working class kept at arms length that know their place and work for the public sector. If there’s not enough public sector jobs to employ the entire population then blame the tories. If they want to study economics or start a business, they’re a class traitor and if they disagree with the BBC then they’re a racist who hasn’t listened to the podcast that tells them which facts to believe. You know, it’s really kind of difficult to see why this election was in any doubt really, all that needed was for Laura Kuenssberg to call Harlepool for Joe Biden 20 minutes before the polls closed. Kier Starmer’s condolence speech should maybe include giving out his LinkedIn details or handing out a CV but the groupthink of course is that Brexit will definitely start to go wrong at some point in the next 2 years and then, finally, the public will wave the Labour party back into power like they did in 1997. Except instead of Union Jacks it will be a mix of EU and Palestinian flags and maybe Jeremy Corbyn will ride along Downing Street on the back of a unicorn.

North of the Border of course, Scotland is a slightly different animal although ironically the national animal of Scotland is the unicorn. Nonetheless, the SNP maintain a stranglehold on voters who wave flags, except of course for match days at Ibrox when the union flag flies proud. Lots of red, white and blue, especially in the lights of the emergency services standing by. Nicola Sturgeon narrowly failed to win a majority at the ballot box, although that isn’t stopping her demands to have another go at losing a referendum, probably by about 52 to 48% same as the rest. It’s like watching someone feeding Monday into a fruit machine waiting for it to pay out, I guess in that analogy, Alex Salmond would be the guy who quickly runs up and puts in a fiver when Nicola was at the bar. I jest of course, I think the last time Alex Salmond was seen running was when you could probably still smoke in that fictional pub. Either way though, the SNP pitch remains very much like the Mel Gibson film, a fantastic story but utterly lacking in facts or reality when it comes to incredibly basic questions like “What currency will an Independent Scotland use?” Alex Salmond at least claimed it would be the pound, with a joint stake in the national debt, Nicola seems to think it will be the Euro but can’t say so because Spain will say that Scotland would be banned from joining the EU, lest Catalonia get ideas about secession. Here’s a second one, what if not all areas of Scotland vote leave, will Aberdeen and the North East be allowed to hold a second referendum about staying in the UK? What if Orkney and Shetland favour Oslo over Edinburgh? These are seemingly simple questions that actually need answere. They're in that lit of questions I'd like answers to. Others include “If Cinderella’s shoe fit her perfectly, then why did it fall off?” Or “If rabbits' feet are so lucky, then what happened to the rabbit?” Or have you ever seen an interview where the SNP are actually grilled or scrutinised by an impartial and credible interviewer?
There were a series of elections this week including Scotland (which we’ll get to in a minute) but also local elections in England with Labour losing more seats than Bill Gates will when he and Melinda divvy up the furniture. A wave of condolences of course poured in from their political allies such as the IRA, Hezbolla, Iran and the Muslim Council of Great Britain. Apparently it turns out that voters don’t want to vote for people whose agenda offers very little other than trying to claim MP ......
Share >>>
http://www.calvinsworldnews.com/searchresults.php?searchfor=20210509