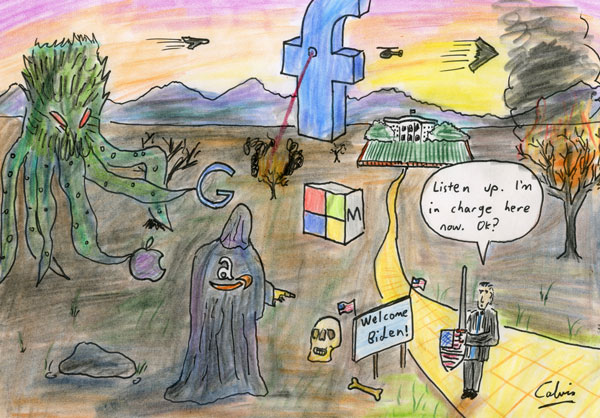 And thus ends four years of President Trump, and the Queen moves onto eventually meeting her 13th US President. Unlucky for some, especially if you live in Syria where the last 4 years have been somewhat of a reprieve from the Obama-Biden era. President Trump though. I’ve found it strange and astonishing that many people I know in remote parts of the UK have seemingly spent the past 4 obsessing over him, despite him having as much impact in their day-to-day life as my choice of breakfast today. It’s like a religion for some I guess, the trump thing I mean. As to breakfast I had 2 slices of pizza and a glass of wine because hey it’s the weekend and I don’t think Special K is special enough. While we’re on the subject:
- What do the military have for breakfast? Conflicts.
- What does Covid have for breakfast? Coughy.
- What do scientists eat for breakfast? Special Potassium
- What do programmers eat for breakfast? Just a byte.

Back to the subject, even in the US itself the president rarely actually impacts that many people’s lives and it’s always fun to challenge people who hate Trump to name some policies that cause them to dislike him so much; they’ll probably talk about the cages thing on the Mexican border but that was an Obama-era policy that Joe Biden oversaw. A lot of things seemingly only because bad when it was President Trump doing them. They might mention the covid response to which you can challenge them to what world leader did it better. Their beloved Europe has been about as utterly useless as a a cricket bat made out of glass, although at least the bat is transparent. If they need some hints on good government to copy a Covid strategy from, maybe you can help them: leaving Sweden's approach of doing nothing aside, Israel has been the one country that went down the distance+vaccine route and is presumably the one to copy if that's how you think things should be done: it's great fun telling lefties that they should urge the government to emulate Israel more and that the Israeli state as a beacon of hope in the world.

Anyway I will go through a longish list of Trumps a achievements in a minute but for now this week saw President Biden’s inauguration in scenes that will go down in history as… televised. Didn’t watch it myself, nor did I watch that royal wedding a few years back, because they’re long and dull and actually I did see a bit when I was flicking through the channels and the scrolling news said he was on his way to Arlington National Cemetery and I thought, “wow he didn’t last long”

As to what lays in store during the next 4 years, it’s worth noting that the expression ‘President Joe Biden’ is an anagram of “Join indebted spree” There’s a good reason why bitcoin has tripled since the election and we’re probably going to see the slow collapse of the dollar as Biden's friends run up trillion dollar deficits and everyone scrambles for the exit door as the economic endgame rears its head. And on day one a priority was to pass an executive order saying that schools have to allow guys to compete in girls sports and use the women’s changing room, because of feeling and gender equality. Although maybe it's part of a plan to get more lazy boys to get active, if they're allowed to use the girls shower room afterwards.

Anyway, here’s that list I promised you of some things Trump did in 4 years:

1 Thanks to deregulation the US became a net oil exporter for the first time ever. The US is finally energy independent, something that nobody was able to do ever since Jimmy Carter promised it.
2 No new wars. Mostly because of that oil policy changing things. It will be hilarious in perhaps 30 years to mention how whichever president at the time is the first President since President Trump to not start a war. Trump will literally be winding lefties up for decades to come with that one.
3 Forcing hospitals to provide medical prices to patients upfront so they can shop around.
4 An order that if foreign drug prices are known then the Medicare system isn't allowed to sign contracts where they pay more than that
saving the U.S. an estimated $85 billion in savings over 7 years
5 Forcing Nato members to increase their spending by $400 billion rather than relying on the US to do everything.
6 Got rid of NAFTA
7 He got more Minority votes than any republican in 100 years, showing that the party is far from dying due to demographics
8 Doubled the child tax credit.
9 Eliminated the Obamacare penalty, which saved people thousands of dollars per year.
10 Instituted a Buy American policy within federal agencies to stop the government from buying from overseas competitors.
11 Instituted “Right to Try,” which means that if you're terminally ill you can legally buy potentially lifesaving but as of yet unregulated medicines.
12 Withdrew from Iran nuclear deal.
13 Made the Arab world formally recognise the state of Israel, something that presidents for decades have tried and failed to achieve
14 Withdrew from the Paris Climate Accord, thus keeping America safe from that wishy hope nonsense. Biden will sign back up to it of course but he’ll never be able to enforce it now that:
15 The supreme court is stacked against him. It's all well and good signing a climate treaty but how's he supposed to actually do anything to meet the aims of it. Banning people from buying heating oil or forcing air passengers to take part in a rationing system? Well to quote Mr Trump, I’ll see you in court.
And thus ends four years of President Trump, and the Queen moves onto eventually meeting her 13th US President. Unlucky for some, especially if you live in Syria where the last 4 years have been somewhat of a reprieve from the Obama-Biden era. President Trump though. I’ve found it strange and astonishing that many people I know in remote parts of the UK have seemingly spent the past 4 obsessing over him, despite him having as much impact in their day-to-day life as my choice of breakfast today ......
Share >>>
http://www.calvinsworldnews.com/searchresults.php?searchfor=20210124