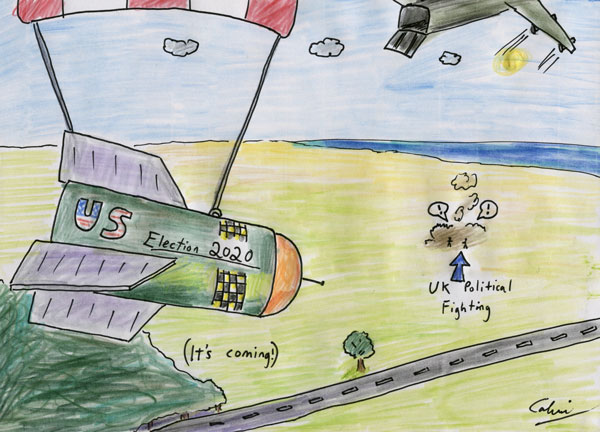 Couple of big stories this week. First there was yet another terrorist attack in France, and after the terrorist tried to buy C4 explosives and accidentally ordered a Citroen C4, this one involved a knife instead and a beheading. I have to give credit to the French police who kept their calm whilst many others were losing their head. President Macron was already about to start a lockdown for Coronavirus so let's see if whether lockdown curfew prevents Tunisian migrants as effectively as it does Corona, I suspect it will be exactly just as effective, by which I mean "not very" Either way, the roads leading out of Paris are so jammed that you'd assume someone had spotted a German reconnaissance plane.

Talking of analogies to the 1930s, this week in Britain saw a bombshell report condemning the Labour Party of anti-semitism, claims that many of the party faithful ironically blame on a zionist conspiracy to smear Jeremy Corbyn. As if he needed help in that or had ever risked winning an election. These of course are the sort of left wing activists that have hammers and sickles on their Facebook page, but probably don't know how to spell the word sickle, the types of people who become geography teachers in order to have a platform to discuss the geography of the Middle East with impressionable children. A good portion of these people probably read that Corbyn had been suspended, and feared that he'd been suspended by a rope from Blackfriars Bridge just like in that conspiracy involving the Vatican in the early 80s. You have to give some credit to Kier Starmer I guess for at least having a go at turning the party into a centrist party, albeit one the doesn't have any sort of policy or clue what it's purpose is. There's a joke I heard that a man goes into a garage and explains that his car labours in first gear and pulls to the left and the mechanic asks, "what kind of car is it?" to which the owner replies "A Kia starmer"

Lastly to America where the poling day is next Tuesday and if some newspapers are talking about a civil war in the Labour Party then as they say they do things far bigger though not necessarily better in the US. Let's run through the possibilities because all of them are awful

1) A Biden win: this could go 2 ways. If he wins and takes the senate then be prepared for regressive tax and environmental laws at a federal level. Those laws will likely be declared unconstitutional, so the court will be topped up with more judges until they get things passed. Honestly, if this happens I could see a number of states openly ignore the law, and then as they say "we're not in Kansas anymore." Except we are because Kansas and most of the oil-rich south are key contenders for that secession.
2) A Trump win: this will result in years screaming by left about conspiracies and asking why the vermin and dumb hicks in their Obama-voting districts didn't do as they were told this time around. Every celebrity will claim they're leaving, but none will unless you mean moving from Santa Monica to Santa Barbara or Santa Cruz or, well somewhere within a few hours drive of Los Angeles
3) Perhaps Biden will win but not have the senate this means gridlock: nothing happens for 4 years with the senate repeatedly voting down Biden's laws and refusing to appoint his court appointees. Eventually he retires and 2024 sees a rerun of this election but with younger and far more extremist candidates on the ballot.
4) The vote is contested with accusations of fraud (probably fact-based accusations) from both sides, and with some counties in key states having turnouts at over 100% which is to be expected I guess when both sides are adding ballots to the count. This scenario will of course go all the way to the top where Mr Trump's newly refreshed US Supreme court will almost certainly rule in favour of him. This is where we get to find out whether California really wants to go it alone or not like they keep threatening. And whether the silicon valley types and their money really do want to live under an independent high tax utopia like they've been so keen to promote in the Trump era when it was as likely to happen as their companies being open and transparent.
Couple of big stories this week. First there was yet another terrorist attack in France, and after the terrorist tried to buy C4 explosives and accidentally ordered a Citroen C4, this one involved a knife instead and a beheading. I have to give credit to the French police who kept their calm whilst many others were losing their head. President Macron was already about to start a lockdown for Coronavirus so let's see if whether lockdown curfew prevents Tunisian migrants as effectively as it does ......
Share >>>
http://www.calvinsworldnews.com/searchresults.php?searchfor=20201031