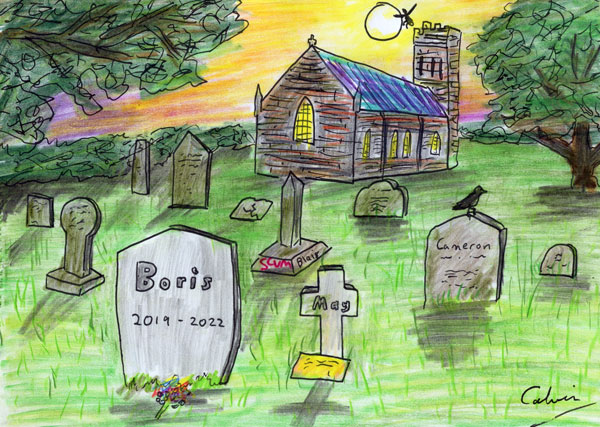 All political careers end in failure, but with the resignation of Boris Johnson, a lot of speculation has been made as to what he’s going to do with all that spare time on his hands. Perhaps go on one of those reality tv shows, I'd imagine Love Island would be right up his street albeit they likely don't pay enough. He famously lead a very expensive lifestyle and if you ever hear someone claim he’s outstanding, it’s very possibly a bank manager discussing his overdraft. As such I thought I’d do a review of what the last 10 prime ministers got up to when they left office

1) Theresa May has stayed on the backbenches as MP for Maidenhead, even staying on and keeping her seat at the 2019 election so she clearly has no plans. Very much like her strategy when it came to Brexit. There’s not much to say really, she hasn’t published a book although she did get some cash for speaking in America before the pandemic prevented her leaving the country. Curiously there’s been talk about her becoming secretary-general of NATO, and she was recently banned from ever visiting Russia. Not that I can think of many reasons you’d want to go there right now.

2) David Cameron famously bought a shed for £25 grand in which to write a memoir which got decent reviews and he was paid £800k for it. However, his main hobby really got going when he became an advisor to Greensill Capital. He was paid $1m per year for 25-days work, in addition to $60m in share options. He was certainly earning his keep though, he convinced Matt Hancock to get the NHS to use Greensill’s Earnd app and then when the pandemic broke out he convinced the taxpayer-owned British Business Bank to give them a largely unsecured loan of £400m. The whole grubby situation was sleazy enough that they’ve since changed the rules. So along with when he called UKIPs bluff by calling the Brexit referendum, it’s nice to know that he’s largely effecting change by messing things up, although I’m sure his mother and his bank manager are very proud.

3) Gordon Brown stayed on as a backbencher for a couple of years although he spent much of that time becoming involved in the Scottish Independence referendum. Of course his main ambition was to get the top job at the IMF, although David Cameron blocked the idea, correctly seeing that it would be like putting Dracula in charge of a blood bank. Brown is famous for two things: [1] being one of the few PMs to never win an election [2] spending 10 years promising an end to boom and bust without realising he was manufacturing the largest boom and bust in the UKs history. He’s spent the last decade doing some laudable work with charities although he himself is paid via a charity foundation that means he doesn’t have to pay tax that would actually help solve the problems in the first place

4) Tony Blair left office and set up shop in the Middle East, possibly under the misunderstanding that the West Bank was a financial institution. He’s earned roughly £100m since leaving office although it always puts a smile on my face when I think about how his career’s work to rebuild the Labour party and be president of a federal Europe was all destroyed in about 3 years thanks to Jeremy Corbyn and Nigel Farage. I remember seeing him interviewed at Davos where he guaranteed a 2nd referendum and it must annoy him that out of a decade’s work (which included things like fixing Northern Ireland) he’s largely seen as a warmonger. He claims to have gone through a religious rebirth since although it’s typically a wishy washy form of Catholicism that includes new age symbols, magic pendants, a belief that the Bible something you can pick and choose bits from, and of course the bit where Vanity Fair claimed he had an affair with Rupert Murdoch’s ex wife.

5) John Major spent the day after the 1997 election at the Oval where Surrey won by 6 wickets which was won of the few victories Major had experienced for years, seeing as how his last years in power were very much like watching the collapse of an English test match side. He went on to be head of Surrey, and later the MCC and wrote a number of well-received books about cricket as well as the usual flotilla of directorships and charity appointments. His main charity appearances seem to be the BBC where he turns up from time to time to moan about Brexit or act as if he is owed respect simply for being less unpopular than Neil Kinnock back in 1992 Curiously he was also appointed a special guardian to Princes William and Harry after the death of their mother albeit the strangest of stories was more when it was revealed that he and Edwina Curry had been having an affair. How did they keep that a secret? Well like one of his cricketing heroes, I’m stumped.

6) Margaret Thatcher in government was polarizing depending on who you were and where you were living at the time. But after she left government, there’s really not a lot of positive things you can say about her and that comes as someone who watched her funeral procession outside St Pauls. She took up a job with Phillip Morris who paid her half a million pounds per year, and also campaigned for the release of Augusto Pinochet and encouraged both George Bush and Tony Blair to invade Iraq. She was quite a cheerleader for Tony Blair who was one those rare few invited to her 80th birthday dinner. Someone else in attendance was her old friend and later foe Geoffrey Howe who summed up how her true post-ministerial legacy was the sheer extent of how her legacy had changed the face of Britain. “Her real triumph was to have transformed not just one party but two, so that when Labour did eventually return, the great bulk of Thatcherism was accepted as irreversible”

7) James Callaghan resigned at the end of the 1970s and the winter of discontent, and he stayed on until after the 1980 party conference where they changed the voting system so that Michael Foot could be elected. That same system would years later lead to Ed Milliband being elected Labour Leader rather than his Brother. Callaghan was one of the last vaguely honourable retirements, he was a non-exec director of the Bank of Wales and he was responsible for Great Ormond Street Hospital retaining the Peter Pan rights indefinitely. There’s also an anecdote kicking around that in 1997 a volunteer phone staffer was phoning random party members looking for recruits. Callaghan was asked if he’d thought about becoming more involved in politics to which he responded that he thought that being Prime Minister had been enough.

8) Harold Wilson resigned after a diagnosis for Alzheimer’s disease although he claimed to be exhausted and simply retiring because he was 60. On his way out he handed out a few questionable honours including a Lordship to Joseph Kagan who manufactured his favourite jacket and had a brief stint at tv, hosting 2 episodes of Friday Night Saturday Morning. It’s terrible tv and often listed in top 10s lists of worst shows ever alongside that sitcom about Hitler, that naked gameshow hosted by Keith Chegwin and any episode of Question Time filmed since the Brexit Referendum.

9) Edward Heath spent years on the back-benches complaining about the Rise of Thatcher as both party leader and then Prime Minister, with many referring to him as the Incredible Sulk. Supposedly a meeting between them was so short that Thatcher stayed an extra half hour for coffee with his PPS so that the press wouldn’t cotton onto how badly it had gone. The 1980s saw him watch as the policies of monetarism and privatization went against everything he stood for and he continued to turn down offers of a cabinet position or an oversea role with the UN or ambassador to the US. There’s a lot of speculation about his private life but I guess the less said about that the better although maybe some of us will live long enough to see the private papers being released.

10) We’ll finish this list with Alec Douglas Home, the last PM born during the Edwardian era and the last to have been in the Lords before he took up the role. He got the job when Macmillan was forced to resign due to the Profumo affair which shows how trivial the Boris scandals were really. Macmillan’s defence secretary had been sharing a lady of ill repute with a soviet naval attaché, vs what, drinking some wine a staffer bought you from Tesco? Anyway, there wasn’t much to his Home’s premiership, one of the shortest ever and after a year in Number 10 he went on to spend the next quarter century back in the house of Lords where he’d started. He came from money so that explains things a bit, he mostly spent his retirement fishing, hunting, writing a couple books and keeping to himself. As they say, the past is a foreign country, although if it is then it does make you wonder why Daily Mail columnists keep saying so many positive things about it.
All political careers end in failure, but with the resignation of Boris Johnson, a lot of speculation has been made as to what he’s going to do with all that spare time on his hands. Perhaps go on one of those reality tv shows, I'd imagine Love Island would be right up his street albeit they likely don't pay enough. He famously lead a very expensive lifestyle and if you ever hear someone claim he’s outstanding, it’s very possibly a bank manager discussing his overdraft. As such I thought I ......
Share >>>
http://www.calvinsworldnews.com/searchresults.php?searchfor=20220722