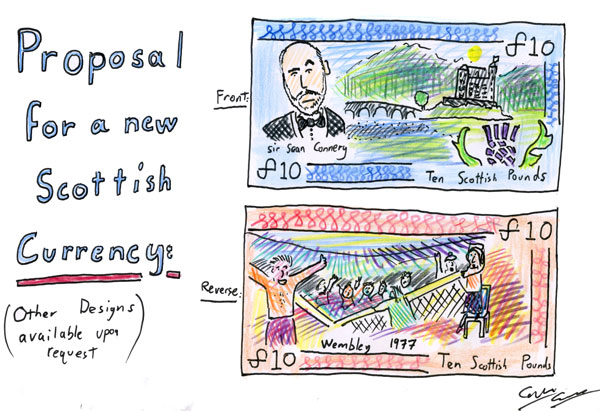 This week I thought we’d look at Scotland, or more specifically the way the place has been managed by the SNP which for decades were an opposition party with one policy, until following the referendum and subsequent election they walked into the sort of majority and absolute control you would normally only see in a country near the equator with nicer weather. Nicola Sturgeon and her supporters though have since embraced the idea of Scotland being a one-party state although those have famously not been especially good governments from which to copy ideas with the one exception of perhaps ancient Egypt which lasted a few thousand years before being brought down by a pyramid scheme. Since then the party has had a go at all sorts of things including running schools or buying a railway, all of it shambolic. It sort of reminds me of how the Chuckle Brothers would turn up each week trying a different job from the one before, hoping things would work out better for them this time. And as always things would turn south but the BBC would keep letting them have a go rather than criticise them.

First of all, let’s look at the economy. On paper, the Scottish Government had a deficit of more than 22% last year, compared to around 15% for the UK as a whole which is shocking. When it comes to 3 letter acronyms that really puts the SNP up there with BHS and AOL when it comes to running a business badly. Perhaps a better one would be the bank RBS which for a while had a balance sheet larger then the entire Scottish economy before it turned out that asking Fred Goodwin to run a bank was a bit like asking Ian Blackford to lose 3 stone. When I was kid, they would casually throw around ideas about reopening the coal mines or how oil would pay for everything but then they decided that net-zero was a vote winner so that’s out the door. Presumably the strategy is to join the EU and be given money as part of a grand plan for Brussels to embarrass England. Although nobody has a clue what currency an independent Scotland would use and the EU have all but confirmed they wouldn’t be allowed in, simply on the basis of Spain and Italy vetoing them, fearful of encouraging their own nationalist movements.

Let’s look at specific examples though. The SNP’s first go at nationalization was when they took ownership of Prestwick Airport in 2013. After buying the failing airport for £1, Edinburgh then paid the airport directors bonuses of £200k and spent over £40m to keep it as a “going concern” In the mean time any money it has earned was largely as a result of President Trump who took up the offer of a military refuelling station although I’m not sure how Nicola and her peacenik friends feel about using taxpayers money to bankroll Donald Trump and his ability to more easily send aircraft to the Middle East, let alone ferry people to a new golf course.
In 2019 there was the announcement that the Scottish Government would take over the Ferguson dock yard in Port Glasgow, rather than see it go bankrupt. And to do so they’d buy two new ferries. Neither have been completed, though the costs have skyrocketd to £250m and arguments have broken out about both senior management pay, as well as who even officially signed off on the contract. Due to failures in the design process, the ferries have windows painted onto the side, rather than actual windows and that about sums up how well things are going but as they say in management, if at first you don’t succeed, redefine success.

What’s another name for long term investment? A: A failed short term investment! So moving on this year saw another go at business as the Scotrail Franchise was brought into public ownership. Everyone on the left knows that changing the ownership and redesigning a website or logo is all you need to fix long term structural issues, especially with that most hallowed of industries, the railways. And so shortly afterwards, no silver bullet was found, and an emergency timetable was imposed on all services that weren’t themselves canceled. It reminds me of that one about the hot air ballooning business that never took off.

Change of topic, The Census. This is a pretty difficult one to mess up. Every 10 years you get a very accurate headcount and you can use it to plan public services. The turnout is normally 97 or 98%. Except the SNP decided that it obstinately do its one at a different time from England, blaming covid, but largely so that they could re-engineer sections of it. This included sections about race and gender that were left blank by vast swathes of a confused public as well as the requirement to use a computer, which immediately left it inaccessible to many of the elderly but also the disabled and those without a decent internet connection – not something that rural Scotland is best known for. There is a £1000 fine if you don’t hand it in although given that 1 in 10 of the population haven’t I frankly question the ability for the courts to even process that many cases, or the government to collect the money efficiently. Although it would go some way to paying for the cost of the debacle, so far £148m in a country that only has 5½m people the last time a (British run) census was undertaken.

There are numerous other angles we could attack from here, there’s the Minimum Alcohol pricing policy which did exactly as its opponents said and drove poor people to buy less food rather than go teetotal. There’s a drugs policy that saw just shy of 1300 drug-related deaths in 2021 which was the 2nd highest ever number. That award goes to 2020 which had been the highest number since records began. There’s educational decline with a focus on promoting wokery and tinkering here and there though with the exception of history which I think is the only subject the SNP really cares strongly about, because it clearly isn’t economics or critical thinking. Nearly a decade ago a new curriculum was launched and Nicola Sturgeon went on record, “Let me be clear – I want to be judged on this” although those targets were recently abandoned.
You really get the impression that nobody cares about any of this stuff because they didn’t join the SNP to run a school or get involved in social work. It’s always been about getting another referendum and another after that until they can get a yes vote and finally move onto better paid jobs in Europe or lecturing in America or maybe ambassador to somewhere. The ethics and moral compass have all been very clearly on display the last few years. There was the court case against Alex Salmond where he was finally acquitted although only after it became clear that members of the SNP had personally tried to influence the judiciary. Just weeks before the trial, Derek Mackay, Sturgeon’s finance minister, was forced to resign after sending a series of inappropriate texts to a 16yo boy. Finance scandals abound with a serious of corruption and embezzlement allegations regarding what happened to money earmarked for a 2nd referendum. That was going to be a big news story but events overtook it with yet more seedy behaviour. Ian Blackford, is the SNPs head person at Westminster and when he wasn’t wearing a suit that looks like it was made out of carpet tiles, he spent years telling people that the SNP had a zero tolerance approach to the sort of things the tories did. But then he decided to express political solidarity for Patrick Grady, the former whip who was shown to have been sexually harassing a party staffer

All of this is what underpins a nationalistic message that Scotland would be better run independently by the SNP on the clearly farcical idea that Scottish, especially SNP, politicians are innately better and more moral than those from England. Especially a posh English person like David Cameron - whose father was actually from Aberdeenshire. The rule by England policy is more ridiculous because before then you essentially had 2 decades of Scottish rule with half of the Labour cabinets for years being from Scotland including both prime ministers. There’s a reason why it was called the British Empire and not the English Empire.

But so finally we get to the unknown question about whether or not there will be a 2nd referendum or whether simply declining it will cause nationalist unrest and further the SNPs cause with expressions like “thwarting the will of the people” carrying more emotive weight that “once in a lifetime” Curiously, in 2017 Boris Johnson was still foreign secretary and he stood by the Spanish government’s decision to “uphold the constitution” that included deploying the Guardia Civil to prevent people in Catalonia from voting. I wonder what ever happened to him…
This week I thought we’d look at Scotland, or more specifically the way the place has been managed by the SNP which for decades were an opposition party with one policy, until following the referendum and subsequent election they walked into the sort of majority and absolute control you would normally only see in a country near the equator with nicer weather. Nicola Sturgeon and her supporters though have since embraced the idea of Scotland being a one-party state although those have famously ......
Share >>>
http://www.calvinsworldnews.com/searchresults.php?searchfor=20220715