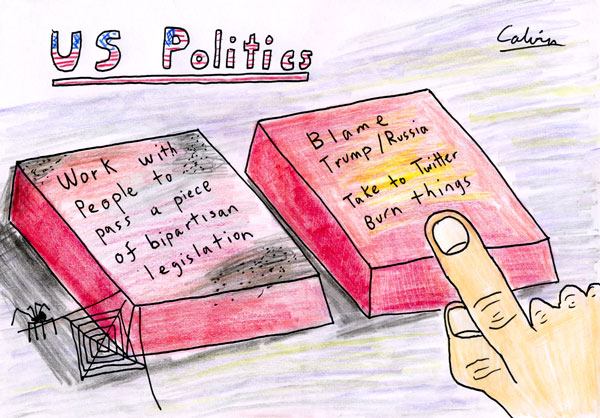 Paul McCartney played at Glastonbury. I wonder if the body double who conspiracists say replaced him in 1966 thought he’d have to keep the act going for this long.

Garry Lineker gave an interview in which he claimed to have sufferer racist abuse due to having slightly tanned skin. Or maybe they were just annoyed about him constantly going around nicking peoples’ crisps. Of course identifying as an ethnic minority thus opens the door to suing the BBC if they ever try to cut his pay. Or maybe he’s also planning to start wearing women's clothes and apply for the job of Doctor Who or perhaps presenting Newsnight.

There are also rumours that the pope might resign so if anyone’s going down the bookies, they might want to go online first and research a list of Ukrainian cardinals

1. The Supreme court didn’t ban abortions. What it did do was allow states to pass laws doing so. Any bans or rules you see will be there because some politicians passed a law, not because a court banned something.
2. Joe Biden and the house and the senate could pass a law guaranteeing abortion rights. America is one of the few countries to not have laws on the subject. They actually tried last month but the law failed to pass because, contrary to what you see on the news, this is not a subject where the majority of politicians want to pass a law
3. Joe Biden is one of those. For decades he was a senator for Delaware and he’s a practicing catholic who spent years trying to pass a law banning abortion nationwide, just in case the Roe v Wade decision was ever overturned. If Biden enthusiastically backed a new law, it would be like watching Prince Charles campaigning on behalf of McDonalds or putting Katie Price in charge of the MCC. Actually, that wouldn’t be a bad idea, at least she’d struggle when it came to inventing new bastardised versions of cricket
4. One of the world leaders to condemn the vote was Emmanuel Macron saying that the US should be more like France. Which is funny because until last week, France had stricter rules than Mississippi. Indeed, with a 14 week limit, France has some of the strictest abortion laws in the western world
5. In contrast, a lot of US States have no time limit and allow abortions in the 9th month of of pregnancy with no reason needing to b given. We’re not talking about cases involving disability or the mother’s life, we’re talking about a lifestyle abortions of, days before the baby’s due date. No other country does that. Going further still, California and Maryland currently have proposed laws working their way through their state legislatures, that would allow abortion up to 7 days after birth. That is euthanasia, not abortion, and the reason that abortion is in the news is largely because the pro-choice side of the debate has become so ludicrously extreme and polarising that many normal people see banning it entirely as the preferred option if you have to pick a side. If that makes life like the Handmaid’s Tale then so be it, it’s probably better than living in something like Soylent Green
6. There is a huge irony here that the two subjects being discussed here are women’s rights and bodily autonomy. Justin Trudeau took to twitter to emphasise to women that it’s your body so your decision and the government should have no say in the matter, having just spent the last 2 years trying to jail people who said that exact same thing when it came to covid. Similarly, people have had careers destroyed for saying that women's rights are a thing or that only women can become pregnant. Now men are supposed to stay out of things though, and not get involved in issues that don’t affect them? According to the more vocal people online, anyone can give birth to a child, regardless of gender. Prince Andrew or Bill Clinton could get pregnant if they wanted to and if they convinced enough woke people to believe them, so so they should have just as much a say on the subject as any of the teenage girls who were also trafficked to that island.
7. Talking of rich people with dubious ethics, someone who stayed out of things as wasn’t involved in this was President Trump. Banning abortion was one of a litany of things the left screamed was guaranteed to happen under Trump and of course it never did, at least until Biden came into power. Same with the economy imploding, trying to ban freedom of movement, journalists being blacklisted for their beliefs, or Russia being emboldened into starting a war without fear of US reprisals. You could argue that Trump appointed 3 court justices, but then you could also throw blame at President Obama who was famously tricked into not filling a court vacancy because it was an election year. An election that Hilary Clinton then lost. And also have the case of Ruth Bader Ginsberg. She was urged to retire years ago, so she could be replaced with someone younger and even more left-leaning. Instead she stayed on before passing aged 87 and being replaced during the Trump administration. It’s interesting how she’s now gone from being a progressive folk hero, to being vilified for her selfish desire to stay on that ultimately tipped the court the other way. Although she herself said for years that the best and only way to settle things would be for Washington to actually pass an abortion law on the subject. But that would involve politicians doing something productive and reaching out across the aisle. It's a real shame there's not a way to settle the matter with a law that also includes a 10year military funding program or a kickback to the energy industry, then we'd have the whole thing sorted in time for the 4th of July
Paul McCartney played at Glastonbury. I wonder if the body double who conspiracists say replaced him in 1966 thought he’d have to keep the act going for this long.

Garry Lineker gave an interview in which he claimed to have sufferer racist abuse due to having slightly tanned skin. Or maybe they were just annoyed about him constantly going around nicking peoples’ crisps. Of course identifying as an ethnic minority thus opens the door to suing the BBC if they ever try to cut his pay. Or maybe ......
Share >>>
http://www.calvinsworldnews.com/searchresults.php?searchfor=20220626