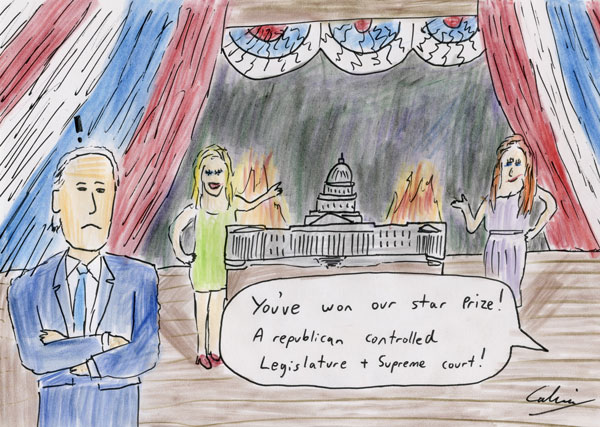 The aftermath of the US election has been a sordid mess and one in which the media’s analysis has been about as neutral as a listening to Jimmy Hill commentate on an England game against Germany. Except of course these day’s its former crisp salesman turned football pundit Garry Lineker offering insight on twitter. And just like Jimmy Hill, like many of the people who voted for Joe Biden died several years ago.

At time of recording Mr Biden has been announced as the winner although there are still a number number of very real and deeply concerning anomalies with the voting counts (which I’ll come to in a bit) but from day one the BBC, CNN and their comrades are very actively pursuing the route that it’s all done, nothing to see here, everybody move along so we can get Donald Trump out of the White House and they can claim editorial neutrality for all they want but I’ve seen Tony the Tiger be more neutral about the taste of frosted flakes. The removal of President Trump is a religion for many people, most of whom are unable to actually provide examples of actions or policies that have actually affected them personally. In Britain it’s normally the sort of people that used to protest outside the US Embassy in part because until recently it was located just around the corner from Selfridges so they could make a day of it, then jump on the tube at Bond Street and head back to their 6 bedroom town house.

At the heart of this debacle though has been a number of highly dubious counts in key counties, many of which were Trump strongholds which switched to Biden by a landslide, at least on the ballots that were asking about the white house, remember that there were senate races and congressional districts up for grabs too and indeed one of the main pieces of evidence in favour of the alleged vote-rigging is that the democrats did so poorly in congressional and senate races. Typically the vote counts are the same because voters cast a vote for the same party on each of the ballot slips yet in many cases there are counties that voted overwhelmingly for Mr Biden yet also returned republican congressmen and Trump supporting senators by the same margin as in previous years.

To accompany this though have been electronic counting machines that have been shown after a handful of recounts to have overcalled Mr Biden’s votes by thousands although we have been reassured that these are one-off glitches, yet that same software is being used nationally in 30 states and court cases are being brought to prevent any further recounts. That counting software by the way is made by a company called Dominion Voting Systems and that company previously donated $2m donation to the Clinton Foundation. All things considered, I have as much faith in those numbers being true and accurate as I do of Mr Biden being able to remember what his own name is without a teleprompter or a slip of paper. And the press coverage of the maths reminds me of when when a kid once asked me if I could help them find the number 10 on a calculator.

Nonetheless for me the big takeaway is that in amidst the talk of the white house the main story has been lost which is that the Democrats did not take over the legislature with big majorities in the congress nor senate. Joe Biden and his supporters can talk all they want about raising taxes or banning fracking or re-balancing the supreme court but they can’t do any of. If joe Biden decides to make sign the Paris accord the republican senate can turn around and reassure the public that they will be doing nothing to enforce it and if Democrat run cities were expecting a blank cheque to bail them and their friends out, they might find that the bailout gets calculated by those dubious ballot counting machines. There’s a real sense that places like Chicago and New York have been purposely run into the ground in recent months so that Biden can preside over a democrat-led bail-out and revival to conclusively prove that the country does better when Democrats are in charge. As it the one thing you can say is that Democrat politicians must be in incredible physical shape because that’s a lot of stretching the truth and jumping to conclusions. For now, President Trump remains in office for another 70 days or thereabouts so lets see what he spends the time doing, or what surprises he has in store for his successor to have to inherit.

The aftermath of the US election has been a sordid mess and one in which the media’s analysis has been about as neutral as a listening to Jimmy Hill commentate on an England game against Germany. Except of course these day’s its former crisp salesman turned football pundit Garry Lineker offering insight on twitter. And just like Jimmy Hill, like many of the people who voted for Joe Biden died several years ago.

At time of recording Mr Biden has been announced as the winner although there ar ......
Share >>>
http://www.calvinsworldnews.com/searchresults.php?searchfor=20201109