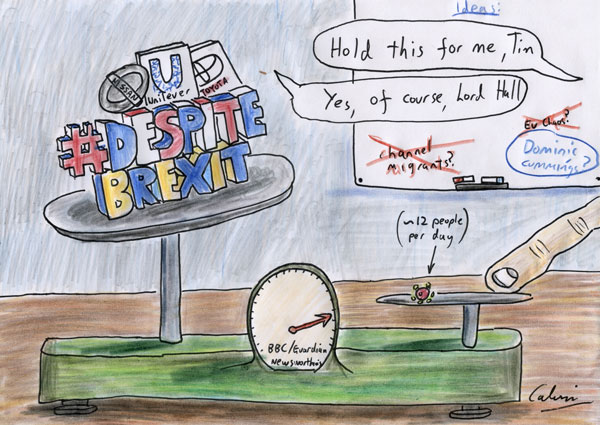 A year ago seems like a different world, there was no Coronavirus (apart from inside that Chinese laboratory), and most folks were just desperately wishing that the news would stop going on about Brexit, I almost found myself reading the sports and entertainment section of the newspaper. But by far and away, the main people wanting to not hear about Brexit were the politicians trying to stop it. Most were just hoping that they could delay and delay and wear the public down until people eventually got tired of the idea, move on and forget about the whole thing, like when we gave Robert Mugabe a knighthood when brilliant actor Michael Caine starring in Jaws 4. Anyway, with the PeoplesVote ultimately being about as popular with the general public as that shark-related mess of a film, it looks like Brexit will finally be going forward at the end of the year, very possibly under WTO rules which is more than anyone who voted Leave ever thought possible. Strange as it seems, it was ultimately people like Tony Blair and Ken Clarke that directly facilitated Brexit by preventing Theresa May’s deal being passed. Talk about shooting yourself in the foot, or the suede loafer in the case of Clarke.

May’s deal was, we were told at the time, a national suicide note. Not being in the EU would bring about the end of the world, or at least the part of the world not lining up to form a federal armed forces headquartered in Brussels, presumably managed by whoever can still identify the Sudetenland on a map after two bottles of Claret. Nonetheless there have been a number of very positive economic stories this year about what the post-Brexit financial landscape will look like so I thought I’d mentioning half a dozen.

1. Unilever. This was a massive story in 2019 after the company initially said that it would relocate to Rotterdam to remain in the EU. Then it turned out that the shareholders would have to get a say and ultimately the company concluded that it would restructure itself to be based in the UK and not the EU. For Remainers, this was the sort of U-turn equivalent to that time Napoleon “changed his mind” about invading Russia. There was of course next to no mention of this story, at least until the Dutch government said that they’d create a law forcing the company to pay a €11bn “exit tax” if they moved to the UK. This was quickly twisted and around and respun as the case of a British Company being forced to spend billions all because of Brexit. Rather than a company potentially choosing to spend €11bn and relocate in order to not be in the EU
2. Toyota is the world’s largest car manufacturer by which I mean the most cars. The manufacturer of the largest car was probably Cadillac in the mid 70s before the oil crisis; those things were massive. Nonetheless, in 2016 we were all warned that Toyota would teach the UK a lesson by closing all its UK factories and moving all the jobs to places where the staff didn’t vote for Brexit. In a surprise decision though Toyota recently affirmed their commitment to making money rather than squandering it and that they’d continue manufacturing cars in Derbyshire, not that you’d hear Victoria Derbyshire talk about it much on the BBC. They’re also going to be manufacturing Suzuki’s new hybrid car there for them and the factory is actually in Edwina Currie’s old constituency so I therefore wonder if John Major ever visited it, years before he was celebrating it’s potential closure to teach Leave voters a lesson.
3. Nissan. Another car maker but there’s that expression about how Those who fail to learn history are doomed to repeat it, not to be mistaken for those who fail to delete their internet history and are doomed to have to explain it. Nissan’s Suderland plant is massive, every year it manufactures more cars in one factory than the whole of Italy. Nonetheless, a lot of people with relatives employed by the EU would rather it close and relocate to Italy or Spain so that they EU can justify all-expenses paid trips to it. Alas Neil Kinnocks relatives will have no such luck ever since Nissan announced they would be instead be closing their Barcelona factory and laying off 3000 EU workers in order to expand their operations in post-Brexit Britain.
4. The other volume car manufacturer is Jaguar Land Rover, who are building a new 3m sq-foot distribution centre in Leicestershire. It’s always nice when a story involving lots of money and Leicester doesn’t turn out to be about Keith Vaz breaking the law. It’s especially good though when it’s yet another story completely at odds with the narrative being spun by the likes of Vince Cable and Michael Hesseltine
5. One of the main criticisms thrown against Brexit at the time was from commentators who rubbished the idea that British train manufacturers could ever hope to succeed or sign deal abroad without EU politicians wining and dining the foreign buyers first, preferably with 5-star accommodation thrown in. Despite this, one of the big stories to happen post-Brexit was Bombarier winning a £2½ bn contract to manufacture trains for Egypt’s new monorail. The UKs other big train manufacturer Hitachi also announced that they were going to spend £400m improving their County Durham plant. If it’s in County Durham, maybe Dominic Cummings can turn up for the grand opening, just to annoy Labour activists on Twitter.
6. Finally I thought I’d mentioned my favourite, if the last few minutes were a meal then this is dessert in so much as it takes the cake for the biggest about face seen in British politics since the time that Nick Clegg switched his position from abolishing tuition fees to increasing them to £9k. Up until now we have talked about private companies but you’d generally assume that ,fair enough, EU funded bodies would indeed relocate their operations to the EU post-Brexit. It was therefore painful to the likes of Ian Blackford when the European Space Agency decided that it was going to spend 100s of millions of pounds building its new Business Incubation Centre in England and not the EU. If Caroline Lucas wasn’t infuriated when she saw the carbon footprint of an Ariane 6 launch vehicle, she was probably incandescent with rage when she discovered that the people who designed it would no longer have the legal right to emigrate to Romania, or see their children run into an Olympic stadium proudly waving a blue flag covered in yellow stars. It does make you wonder if the EU is all just a long term ploy by Belgium or Luxembourg to do well at the Olympics by claiming a shared “European victory” in the velodrome rather than earning 6 medals and watching Team GB come in the top 5, #DespiteBrexit
A year ago seems like a different world, there was no Coronavirus (apart from inside that Chinese laboratory), and most folks were just desperately wishing that the news would stop going on about Brexit, I almost found myself reading the sports and entertainment section of the newspaper. But by far and away, the main people wanting to not hear about Brexit were the politicians trying to stop it. Most were just hoping that they could delay and delay and wear the public down until people eventuall ......
Share >>>
http://www.calvinsworldnews.com/searchresults.php?searchfor=20200921