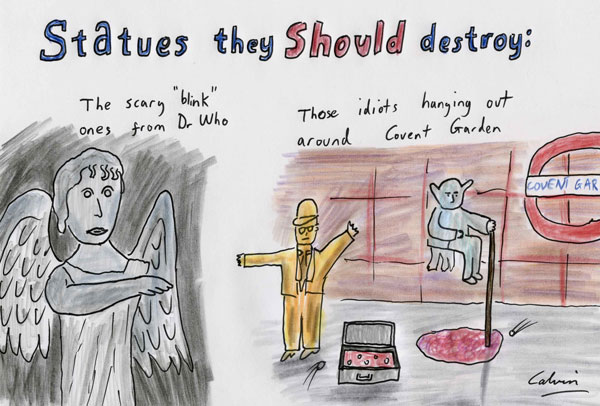 In the space of a week and a half the reasonable protests of a man’s death have escalated rather quickly from a movement arguing simply for justice. Instead we’ve seen a series of marches, riots and angry demands extending from everything such as police reform to more fringe ideas like banning the tv show Thomas The Tank Engine and demanding that Scotland remove statues of Wallace The Bruce, on the spurious grounds that he was racist for not employing Africa-Americans in 13th century Scotland. Or maybe it's because they're confusing him with Mel Gibson.

Ladies and gentleman you may wish to call me Rod Serling for the next few minutes because we have crossed over into the Twilight Zone here. It’s a dimension not only of sight and sound but of mind, wait in fact no it isn’t, it's not of mind, it’s a mindless rabble where a political and media class are too terrified of being seen as politically incorrect to tell people to go back to writing letters to the Morning Star or setting up a poll on Twitter. This isn't the idiots left in chart of the asylum, because at least then the problems would be mostly in the vicinity of the asylum. An asylum that would at the very least give us movies like Silence Of The Lambs or One Flew Over The Cuckoos Nest, rather than banning Gone With The Wind a film which in a twist of irony featured the first black Oscar winner but sure let's ban it until the Academy issues Oscar Statues in a rainbow of colours and not just gold. That film's whole plot is that the South loses the Civil War and Abraham Lincoln frees the slaves but this mob, these are the people that in London vandalised the Abraham Lincoln statue on the basis that he lived a long time ago so must have been a slaveowning racist and goodness knows what they'd have to say about actress Honor Blackman if they saw her surname.

To this day I’m still unsure as to what the protestors in London actually expect Boris Johnson to do with regards to police reform in America, it’s rather like demanding that your MP makes Apple go back to having USB ports on their laptops. Or picketing a branch of Tesco because your train tickets cost too much. At least i think that train tickets are still one of the things that Tesco doesn’t sell. I guess it’s probably somewhat more useful than protesting outside a corporate office due that’s empty because everyone’s working from home but as I said we’re in bizarro world territory here anyway, I was especially intrigued by furious demands to ban the children’s show Paw Patrol in which 3D puppies help solve problems and fix things, supposedly the rage is over the fact that one of the puppies dresses up as a emergency workers wears a little policeman's hat and badge. I’ve never seen the episode in which the fictional dog kills people or uses racial slurs, not even to the other different coloured dogs. Perhaps it’s on a DVD special and besides my kids are more into Ben & Holly’s Little Kingdom so I’ve only seen a handful.

Let’s look at America though where they’ve been having a riot, literally. A 6 block section of Seattle is currently being run by a social commune where there are no rules and everyone solves thing in partnership, which in practice means it’s a borderline active warzone with looting, people unable to get food or clean water and scenes very much like something out of a Movie. At least I think it’s like a movie, it’s been months since I was able to go to the cinema. Either way very little is likely to happen now legally speaking with any good faith and public support for change now destroyed, much like a newly torched branch of Foot Locker or a mobile phone store robbed of all it's pretend demonstration phones in a crime presumably carried out by people in such a frenzy that they were probably stealing more of the phones advertised as 50% off. If protests had remained peaceful, they would have achieved some aims like police reform, or at the very least preventing the police unions from keeping convicted officers on the payroll. Instead it was transformed into a culture war where in an us-vs-them situation, most people will side with the people that don't want to ban Citizen Kane because it's described as black and white.
In the space of a week and a half the reasonable protests of a man’s death have escalated rather quickly from a movement arguing simply for justice. Instead we’ve seen a series of marches, riots and angry demands extending from everything such as police reform to more fringe ideas like banning the tv show Thomas The Tank Engine and demanding that Scotland remove statues of Wallace The Bruce, on the spurious grounds that he was racist for not employing Africa-Americans in 13th century Scotlan ......
Share >>>
http://www.calvinsworldnews.com/searchresults.php?searchfor=20200613