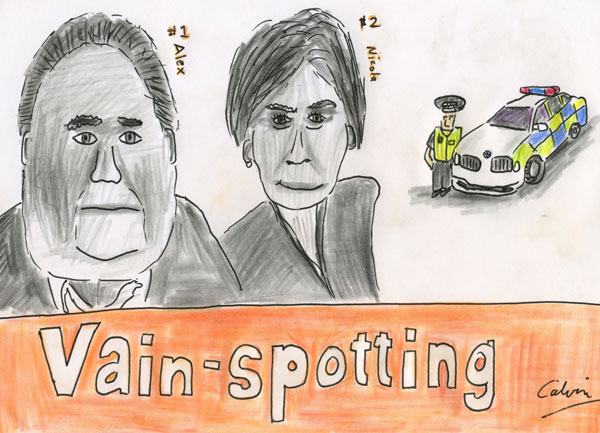 In the news this week
- Shamima Begum learnt that she’s definitely going to be unable to return to Britain after her court appeal process turned all ironic and blew up in her face
- Captain Tom was finally laid to rest although in bizzarely cruel turn of events, the casket was carried in a German-built Mercedes-Benz followed by a BMW.
- Harry and Meghan did two major TV appearances, being interviewed by Oprah and James Corden, leading many to demand that Harry & Meghan should change their attention-seeking ways and start respecting Harry & Meghan’s demands for privacy.

There was also a fairly big story in Los Angeles where Tiger woods was involved in a car accident. We've all seen him make a 300 yard drive except this was the first time that the drive in question was down the side an embankment. Talk about landing in the rough. It at least answers the question of "Why did Tiger Woods buy a new car?" "To make a hole in one" Supposedly the sheriff who oversaw the accident investigation confirmed he wasn't drunk after making him do a field sobriety test where Tiger was asked to count from 1 to 1000 counting in 50s which was probably pretty easy if he was counting out $50 bills as he was doing it.

But of course the other big story of the week was from Scotland where Alex Salmond was giving evidence at a hearing at Holyrood as to whether Nicola Sturgeon deliberately mislead parliament. I say “hearing” but there's a salmon and a sturgeon so perhaps this one is pronounced “herring”
What are the two competing sides of this story though:

1. Mr Salmond claims that there was an ongoing campaign led by the government to damage his reputation and potentially throw him in jail despite his innocence. He says that the prosecution service threw vast public resources at a fabricated court case when then there was no real evidence against him. The SNP led government supposedly forced it to do so, against legal advice but backed by perjury and lies and an easily coerced civil service allowing it all to happen. There is institutional bias and corruption at the top level and SNP apparently stands for Subterfuge ‘n’ Perjury
2. Nicola Sturgeon on the other hand claims it’s all a bizarre conspiracy theory with no evidence to back any of it up and that after they fell apart Alex decided to drag her reputation into the mud and force her to resign.

The key thing is though that Alex Salmond has no evidence to present because he’s currently under a court order to not share the evidence he has, supposedly damning texts and the very communications proving that Nicola Sturgeon (allegedly) used the law and coerced the prosecution service to throw him under the bus. I say bus but if it’s Edinburgh I should say throw him under the tram. We are currently now living in a world where Alex Salmond of all people claims that the Scottish institutions cannot be trusted to run an independent country, and that’s coming from a man who’s spent his decades long career fighting for that very one thing. It’s akin to if Carolyn Lucas had done a lap around the Top Gear track or if Jamie Oliver was doing an advert for McDonalds, although given what happened to his business empire stranger things have happened after all, the only dough he has these days is that sourdour starter sitting in the cupboard above the spice rack.

With regards to the Salmond case though the one question I’ve not quite gotten to the bottom of is “why?” The SNP were fearful that they were going to lose seats because of the court case and their wrongly placed expectation that he would go to jail. It’s why they sided with allowing Boris Johnson to call that election in 2019, damage limitation at the ballot box. That’s the election that decimated Labour, gave Boris a thumping majority and ultimately led to Brexit being able to happen. If some of what Salmond says is true then Nicola Sturgeon gambled her reputation, allowing Brexit to happen, got her husband to allegedly commit perjury and possibly risked the public turning on the very idea of Scottish Independence itself. All for what? Because her and Alex disagreed about things? There’s clearly something else being hidden from public view here and unfortunately we have no clue what it is, unless there are secret clues as to what it is just south of Edinburgh at Rosslyn Abbey and that Dan Brown therefore writes a story about it. And it gets turned into a film with an action scene where Tom Hanks ends up in a car chase at Donald Trump's golf resort and there's cameo where Tiger Woods looks at the speeding car and then camera and shakes his head in disapproval.
In the news this week
- Shamima Begum learnt that she’s definitely going to be unable to return to Britain after her court appeal process turned all ironic and blew up in her face
- Captain Tom was finally laid to rest although in bizzarely cruel turn of events, the casket was carried in a German-built Mercedes-Benz followed by a BMW.
- Harry and Meghan did two major TV appearances, being interviewed by Oprah and James Corden, leading many to demand that Harry & Meghan should change their atte ......
Share >>>
http://www.calvinsworldnews.com/searchresults.php?searchfor=20210228