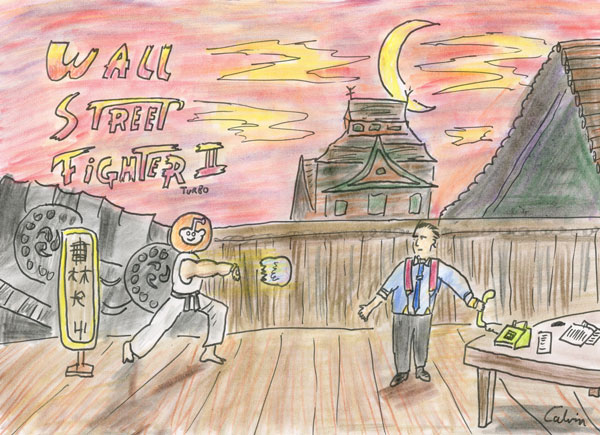 Let’s go for a bit of financial news this week. Normally when stories about business make it into the headlines it means one of only 5 things:

1) Petrol Prices are up and the BBC blames it on Brexit
2) Petrol Prices are down and the BBC claim that it's the start of a Brexit-induced recession
3) Maybe petrol prices are flat but an economist from the Labour Party is brought on about wider Brexit-related economic concerns. You know, I'm starting to spot a trend here...
4) Maybe unemployment is up because George Osbourne keeps taking all of the jobs, to add to his roster of other pretend jobs and nepotistic directorships. And of course at that point someone points out that if it weren’t for the Brexit referendum he’d maybe still have his job at Westminster.
5) The perennial favourite, a football club that has gone into administration because of paying people £300k per peek to play football isn’t really a viable business. Sad news though of course for the fans though, plus the loss of 11 jobs, or perhaps more if you include the manager and the subs bench. Said news as well for the taxman as well, sometimes the footballers pay tax on their wages, if they’re at a mid-ranking club.

Anyway, the stock market. This week we’re talking about Gamestop, the computer game retailer which this time last year was $4 per share, started the year at $17 and a couple days ago hit $469 at traders piled in on the “event” and traders with keyboards competed with Gamestop fanatics who had presumably visited the store in order to pick up one fo those controllers with a Turbo button. At the heart of it all is the online trading site RobinHood where members of the public can log in and trade stocks and shares and derivatives products and given what happened it makes you wonder if they were asked for their username and password and instead entered the Konami Cheat code.

To break down what happened, the shares were seen as overvalued by some in the finance world so a lot of short sell options were placed. That’s when you place a bet by borrowing shares from other traders, sell them with an intent to buy them back later and effectively profit if the price goes down. But these positions are recorded and a group on Reddit spotted that they could cause a lot of damage if they manipulated the price upwards and so thus began a crowd-funded buying spike, sending the price upwards. In trading terms this means that the short sellers had a choice of either selling at a huge loss or buying yet more shares to cover their borrowed position, and this of course sends the price upwards further until it's higher than Jerry Garcia. This situation continues until enough people have been forced to sell out at a loss and the price can once more find it's true market price. Effectively it means crashing to earth and wiping out anyone who bought in at the top. As GameStop would say, it’s how you play they game that counts and the wall street firms were left haemorrhaging billions and looked like Sonic the Hedgehog when all the golden rings spill out of him. This is what Occupy Wall St spent years trying (unsuccessfully) to do, except they did it by setting up a shabby campsite, whereas the Reddit group behind this week’s events achieved it all sat luxury chairs in their office with cases of energy drinks and probably eying up a sports car or two with the money made from trading it back and forth, possibly a Tesla, ironically another share with suspicious activity on it. This was no 'workers of the world unite' moment though and the kids behind it were playing with mummy and daddy’s money but the reasons or cause are irrelevant so much as the outcome: namely the era of populist anti-establishment action did not die with the election of Joe Biden, anymore than than people’s dislike of Harry & Meghan didn’t die when they decided to flee the country with unpaid bills

Flash forward a day or two and the RobinHood trading app banned buying or selling of those Gamestop shares, which is interesting because there’s a series of financial links between Robinhood, the bank Citadel, and the GameStop business at the heart of it all. Go look it up elsewhere if you’re interested, it’s quite the rabbit hole. There’s also so many lawsuits now being filed against the company that the legal profession are envious for the workload they had when it was only President Trump trying to either sue a trade commission or maybe just scam a local contractor out of an invoice. The whole situation is actually so crazy that Ted Cruz, the darling of the right retweeted something from hardcore leftist Alexandria Cortez. It’s like when you find a Socialist Workers leaflet warning about the dangers of the EU and you realise just how bad things have to be for that broad a spectrum of people to be in agreement. I was going to make an analogy of the spectrum being from infra-red to ultraviolet, but if the hard left are involved then I guess that means it's pronounced “ultraviolent"
Let’s go for a bit of financial news this week. Normally when stories about business make it into the headlines it means one of only 5 things:

1) Petrol Prices are up and the BBC blames it on Brexit
2) Petrol Prices are down and the BBC claim that it's the start of a Brexit-induced recession
3) Maybe petrol prices are flat but an economist from the Labour Party is brought on about wider Brexit-related economic concerns. You know, I'm starting to spot a trend here...
4) Maybe unemployment is u ......
Share >>>
http://www.calvinsworldnews.com/searchresults.php?searchfor=20210131